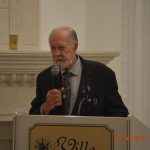 Joseph M. Scheidler is National Director of the Pro-Life Action League, a national pro-life educational and activist organization headquartered in Chicago. Joe left a career in public relations to become a full-time pro-life activist shortly after the U. S. Supreme Court issued its Roe v. Wade opinion in 1973.

When his brand of on-the-streets direct action met with resistance from established pro-life organizations, he and his wife, Ann decided to found the Pro-Life Action League in 1980. It has been said that Joseph Scheidler defined pro-life direct action.

Father of Pro-Life Activism Joe Scheidler was called the “Green Beret” of the pro-life movement by syndicated columnist Patrick Buchanan. His wrote the book on fighting abortion, CLOSED: 99 Ways to Stop Abortion, in 1985 and updated it in 1993. Joe produced the videos Meet the Abortion Providers and Abortion: The Inside Story, featuring former abortionists who testify to what really goes on in the abortion clinics.

Joe also produced the definitive video on sidewalk counseling, No Greater Joy, and Face the Truth, an 11-minute video on a unique, highly visible pro-life demonstration using large graphic abortion posters to bring the truth about abortion to the American public.

To celebrate the League’s 25th Anniversary, Joe produced the video, Action Speaks Louder Than Words, a chronicle of the Pro-Life Action League’s activities and the importance of pro-life activism.

His memoir of more than forty years as a pro-life activist, Racketeer for Life, is scheduled for publication in November 2016.

Joe Scheidler was the chief defendant in a RICO lawsuit brought against him, the League and other pro-life activists by the National Organization for Women and two abortion clinics.

The RICO case, NOW v. Scheidler, was filed in 1986. He originally won in the lower courts, but the case was sent back to the Federal Court by the Supreme Court in January 1994. After a seven-week trial, Scheidler and the other defendants were found guilty of racketeering by a six-member jury. That finding was finally overturned by the Supreme Court in February 2003.

Unwilling to concede defeat, NOW appealed to the Seventh Circuit Court of Appeals to undo the Supreme Court’s mandate. The U.S. Supreme Court heard the case again in November 2005 and issued a unanimous decision in favor of Scheidler in February 2006. However, NOW continued to wrangle over the details of the final judgment in district court and did not finally conclude until 2014, when NOW was finally required to pay final costs to the Pro-Life Action league.

A Dynamic Speaker and Media Guest

Joe Scheidler is a stimulating and controversial guest on radio and TV interviews and talk shows and has appeared on more than a thousand programs including: ABC News Nightline, Donahue, Crossfire, Face the Nation, Good Morning America, MacNeil/Lehrer Report, The O’Reilly Factor and others. He has written many guest columns for newspapers such as USA Today and The Wanderer and has published articles in several national publications.

Joe is a dynamic speaker on the moral dimensions of the abortion issue and the effectiveness of direct action. Nationwide, he has spoken in more than 1,000 towns and cities since 1980, in 48 of the fifty states and has conducted on-site workshops and lectures in Australia, New Zealand, Ireland, Canada, and Italy.

Joe Scheidler is a recognized expert on the abortion culture, sidewalk counseling, the spiritual dimension of pro-life activism, fetal experimentation, working with the media, the responsibility of the church to fight abortion, battling the courts and the need for a return to morality.

In July 2014 Joe launched a radio talk program on Catholic radio, with weekly commentary on life and culture.